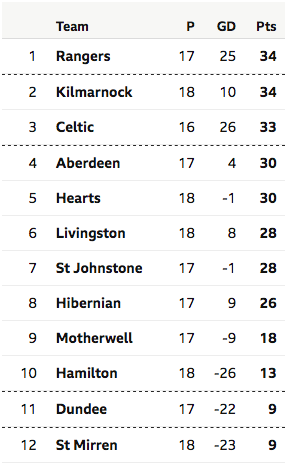 After the strange celebrations of Thursday night’s Europa League progression, Celtic travelled to Easter Road on Sunday to face Hibs. And for the third time this season, Celtic lost a league match in the aftermath of a European tie.

I didn’t catch Sunday’s game on this occasion, but there were a number of changes. Injuries or not, Celtic appear to have been beaten my a hungrier side.

And you know what, I’m not really going to complain. Because the way this season is turning out it is anything but dull in the Scottish Premiership.

The current campaign has seen a fantastic effort by a number of teams in the league. So much so that a mere 8 points separates 1st place from 8th place right now.

It is a phenomenal statistic to think that two-thirds of the league is still in the race. Yes, they may not all be there as the season wears on, but with the half way mark almost reached by every clubs,this is panning out to be a rare spectacle in Scotland.

The 2-0 win for Hibs on Sunday allowed them to close the gap at the top from 10 points to 8 points with Rangers back at the summit after their 1-0 win over Hamilton. Kilmarnock beat Dundee 3-1 to put them above Celtic.

St Johnstone lost ground after a home defeat by Motherwell whilst Aberdeen got a crucial away win at St Mirren. And after Livingston mauled Hearts 5-0 on Friday night, the Scottish Premiership looks very different.

Celtic have four games before the end of the year and the winter break. After that most Celtic fans are expecting a flurry in the transfer market.

A number of players are unavailable right now and there is potential risk that some may move on permanently or on loan come January. The weakened areas will need to be looked at now with a view to bolstering for now and in the future.

Brendan Rodgers stated that he has earmarked attack as his main area of focus having lost Moussa Dembele right a the end of the summer transfer window and Leigh Griffiths taking a break from the game in the last week. He will also need to think about defensive and midfield replacements though.

With Dedryck Boyata and Filip Benkovic both certain to leave, the central defence does not have any solidity beyond May or possibly even January if either were to leave then. And it doesn’t stop there because new contract offer or not, Mikael Lustig will need to be replaced at some point in the future.

So far Brendan has shown little faith in Cristian Gamboa or Anthony Ralston and has stuck by the vice-captain. The former is out of contract this summer and Ralston hasn’t featured despite signing a new contract a year ago.

Scott Brown is rumoured to be thinking over a move to Australia when his contract runs out. I personally thought he’d stick around for a couple more years but if there is any truth in the story then it would be a difficult offer to turn down.

That would leave a huge hole in this squad in terms of leadership, influence and experience. Who would replace Broony within the current squad?

Callum McGregor has been great, but is he the natural successor? Eboue Kouassi was said to be Broony’s replacement but we’ve seen very little of him.

We do have a healthy supply of midfielders right now. Some of which, like Kouassi, can barely get a game.

Yousouff Mulumbu is backup and Nir Bitton injured, but Celtic will need someone to fill the shoes of Broony. That may well emerge as the months continue to roll past or we may have to seek someone out.

Even in the goal keeping department, Celtic will need to think ahead. Craig Gordon has been a mainstay for nearly five years now, but he has one year left of his contract after this season.

There’s nothing to suggest that he cannot continue for a couple more years. At 35 he probably will but realistically, a long-term replacement has to be sought as he’ll be 37 by the time his contract runs out.

Scott Bain came in on loan and eventually signed a permanent deal in the summer. We would need to see him more regularly to know whether he is the long-term replacement for Gordon though.

Celtic have to be proactive in January and June. We’ve already seen the squad decimated, this season through injury, suspension and players moving on.

We will lose more players between now and the summer. We need to plan for the future and for the tough games that lie ahead.

This league will be hotly contested if the season so far is anything to go by. And today Celtic will also find discover their European fate.

The draws for the Champions and Europa League take place today. Whoever Celtic get will be a huge challenge.

Let’s hope the board are prepared to back the manager. We need new blood or there will be blood.

One thought on “We need new blood or there will be blood.”