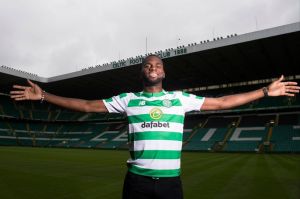 The most likely rumour ever to have become reality at Celtic in recent years is that of Odsonne Edouard. Today, that reality was confirmed.

After a successful season long loan in Glasgow, the 20-year-old Frenchman has signed a 4 year deal with the Hoops. The tried and tested striker persuaded Celtic to break their 18-year-old transfer fee record of £6M previously held by Chris Sutton’s move from Chelsea in 2000.

I guess that means Odsonne was only 2 years-old when Sutty signed for us. Christ I feel old!

John Hartson arrived the following season for the same fee. Since then Celtic have not breached that amount, mainly because of the state of the Scottish game.

Edouard will now continue to battle with Leigh Griffiths and fellow Frenchman Moussa Dembele for a striking role next season. This is great news for Celtic and their attacking options.

The transfer wasn’t about breaking the bank. It was about good business with very little risk if at all.

Celtic have spent millions of pounds on strikers over the years that never ever worked out be it on loan or on permanent terms. On this occasion the club have invested wisely on a proven talent who will only get better with age.

The details of the deal with PSG is unclear at this time, but the club did say it is the biggest deal they’ve ever done. When you consider that Celtic sell so many players for big money, I think they’ll feel this deal can be justified especially if Celtic were to lose Moussa Dembele in the next twelve months.

Transfermarkt have stated the fee to be worth £10.26M. I would imagine for a club as prudent as Celtic, that won’t all be at once.

With this move sealed, Brendan Rodgers can now turn his attention to the overall shape of the team. Pre-season training begins on Monday and his main focus will be preparing those not at the World Cup for the forthcoming challenges.

The futures of other squad members will be assessed over the summer, but for now Brendan will expect all but his World Cup attendees in on Monday. It doesn’t seem like much of a break, but in a short playing career that offers a better lifestyle than many of us are ever likely to experience, I won’t feel too sorry for them!

One thought on “Ed Bhoy”