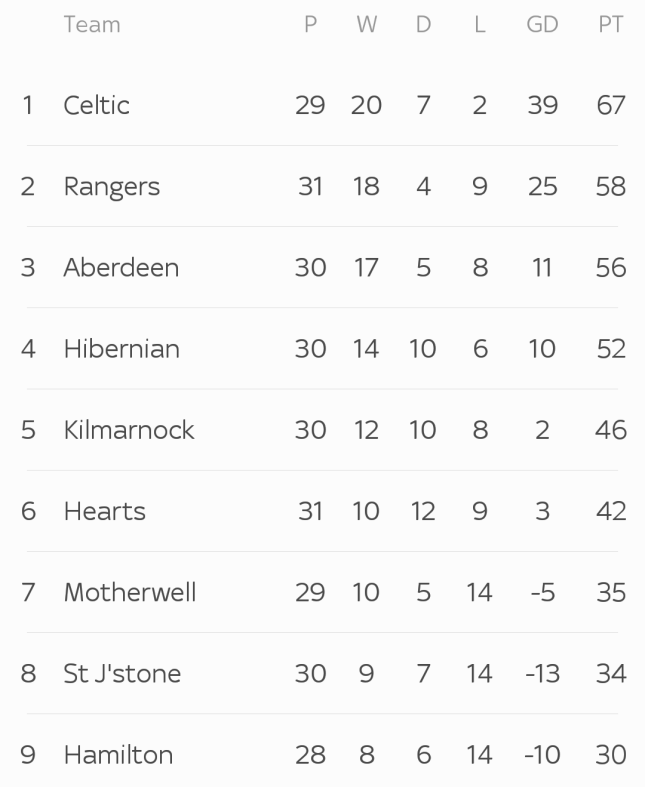 I’d be lying if I said I’m not enjoying the hurt that the blue half of the city are enduring right now. More pleasurable because every time someone opens their mouth they make it worse for themselves and more entertaining for people like me.

Up until last Sunday’s delightful win at Ibrox we’d been getting spit roasted by the SMSM and the Ibrox loyal about a title race. In less than seven days they’re flutes are playing a different tune.

Graeme Murty, mastermind of six straight wins over weaker opposition has felt the reality of defeat against Celtic and Kilmarnock at Ibrox. He doesn’t seem like a bad guy, but his fan base voted with their feet yesterday after walking out with 20 minutes left.

In a week that saw Barry Ferguson come out with the most imbalanced piece of sporting drivel, we’ve now seen the true nature of this ‘title race’. Aberdeen are closing in on second spot and Celtic can increase their lead today if they beat Motherwell.

Kieran Tierney is out for this one and the pointless international friendlies thankfully. Tactical plot by Brendan methinks…or is it is luck, Barry?

I digress…Celtic go into this game with players coming back into contention. A win today would shut the door to anyone supposedly mounting a challenge.

Motherwell have a very slim chance of a top six finish. In order to do that they’d need to win all their remaining games before the split and hope Hearts falter.

Not an impossibility but they’d also need to start by beating Celtic today. That’s no easy task so I expect both teams to be well up for this today.

Defensively Celtic need to be more resolute. Last week was an abysmal performance at the back, gifting two goals in the process.

Such errors need to be stamped out by Brendan Rodgers. I don’t expect too many changes at the back but there’s a chance Marvin Compper or Calvin Miller could come in for this one.

In the midfield Tom Rogic and Stuart Armstrong are back in contention. So too is Patrick Roberts but he also has to challenge James Forrest for a spot.

Charly Musonda will also be looking for more game time. And with Moussa Dembele rediscovering his form and Odsonne Edouard proving his worth, Celtic are looking stronger.

It’s not a position we’ve really been in the entire season. The timing is good.

One thought on “Time to close the door”