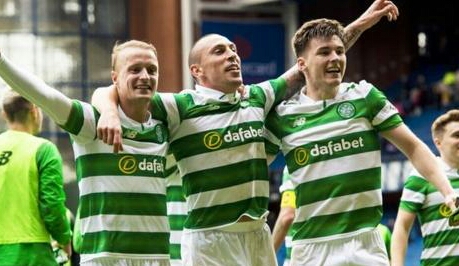 The headline says it all really. Celtic wiped the floor with the Ibrox side yesterday.
Luckily for the home team, Celtic missed some glaring opportunities. Thus keeping the scoreline to a mere 1-5 for the Hoops.

Aside from being Celtic’s biggest victory at Ibrox, the true gulf in class was apparent. Let’s not kid ourselves on though, what you see at Ibrox these days is mutton dressed as lamb and not even te succulent kind.

Wearing their historic colours, being supported by the same fans and playing in the stadium doesn’t make you Rangers 1872. Sadly, many think they are still the same club.

On Saturday we witnessed an eclipse. Not the first betwen ‘us’ and ‘them’ it has to be said.

Last seasons defeat in the cup to the then Championship club and this seasons draw at Celtic Park was enough to convince them that they were back. They are not back because they have problems on and off the field.

Celtic are the polar opposite. The club is running like a well tuned engine.

What we saw yesterday was Celtic at their best. The passing, the movement, the attitude all worked together to control the game from start to finish.

If it wasn’t for a few bad touches or finishes, Celtic would have been five goals to the good before half time. Still, these were five great goals from Celtic.

A penalty tucked away beautifully by Scotty Sinclair in the seventh minute. This came courtesy of a needless tackle on Patrick Roberts inside the box.

He wasn’t going anywhere, but Myles Beerman decided to bring him down anyway. The Manchester City loanee invited the challenge and Beerman took the bait.

This superb start for Celtic continued to grow and just over ten minutes later, Leigh Griffiths got himself on the scoresheet. We know quality Leigh has and this was a stunner.

After receiving the ball on the left he moved swiftly towards goal and unleashed an unstoppable effort from the left edge of the penalty area. The shot flew over the head of Wes Foderingham, such was the pace and power of the left foot drive of Griffiths.

Seven minutes into the second half, Callum McGregor tucked away his second successive goal against the Ibrox club. He received the ball inside the box and remained composed to tuck his second goal in the space of a week.

A great start to the second half. There was more to come though.

Griffiths drove a free kick into the box where Dedryck Boyata was there to nod home the easiest of headers. The Ibrox club were well and truly on the ropes.

At 37, he’s still fit and scoring goals. Fair play to him, he’s certainly done them a favour and made sure they got something from the game.

Celtic exorcised their only blip in the game though in brilliant style. Mikael Lustig, a player who really seems to love life at the club, emerged from his staging post and got his name on the score sheet.

It isn’t unlike Lustig to score for Celtic but this goal was different. Piling through the middle of the park, he rolled his foot over the ball once, rode a tackle from Danny Wilson and curled home number five to make the icing on the cake in the eighty-seventh minute.

The humiliation was complete. Celtic were on a different level.

Like many games between the old club and the new club based at Ibrox, there were flashpoints and ugly scenes. A home supporter came on to the park to confront Scott Brown and Scott Sinclair was the subject of racial abuse as seen on live TV.

This kind of abhorrent behaviour was sickening. Nobody condones this kind of behaviour except those who carry it out.

Celtic were not deterred. There were a few player face offs, but no red cards.

Much was made of Jozo Simunovic’s tackle on Kenny Miller. In commentary, Andy Walker was convinced this was a red card offence.

Miller was incensed that Simunovic didn’t even receive a booking. Let’s be clear though, this was a strong and clean tackle from a guy who mopped up everything with finess.

The ball was won cleanly. I could watch the tackle all day.

It was being shown across the internet on non-Celtic websites praising how well executed this was. In fact it was one of my favourite moments of the game.

Personally I thought Jozo and Dedryck had an amazing game. Long may that continue.

Celtic can take nothing but positives from this match. Meantime the Ibrox club must lick their wounds.

One thought on “A masterclass…”